Who Is at Fault in a Single-Car Accident?

For one reason or another, you lost control of your vehicle. The sounds of screeching tires, crunching metal, and breaking glass were followed by an eerie silence. You were in a single-car accident, and you were injured.

Perhaps the knowledge that many others have found themselves in your situation is comforting, but you’re still left with the difficult task of paying for your medical bills, vehicle damage, and countless other repercussions of the crash. That leads many victims to ask who is at fault in a single-car accident. Is it always the driver?

The answer to that question can make or break your ability to recover compensation for what you’ve been through. Here are some of the key factors explained by our California car accident lawyer you need to know.

Types of Single-Car Accidents That Occur in California 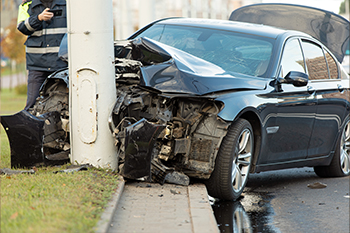 That means more than half of deadly car accidents on our roads involved only one vehicle, and that number doesn’t even begin to account for the thousands of non-fatal — but still injury-causing — single-car accidents that occur in California each year.

Those accidents have a lot of possible causes, including the following:

Why Fault Matters in Single-Car Accidents

Why should you care about fault in your single-car accident in the first place? Because if your accident was someone else’s fault, they may owe you personal injury compensation under California law.

Additionally, fault in single-car accidents can affect insurance claims, so it’s a good idea to have a clear picture of what and/or who caused your accident — especially if you were injured in the crash.

Is the Driver Always at Fault for a Single-Vehicle Crash?

Initially, it may seem that the only driver involved in a single-vehicle accident would always be at fault for the crash. It’s understandable to think that way, but as many Californians who have been hurt in one-vehicle accidents can tell you, that’s not always the case.

The answer, then, is no — the driver isn’t always at fault in a single-car accident. Various other parties might have contributed to the crash. If you plan to pursue compensation from the at-fault party, the challenge then becomes identifying that party and demonstrating that they held some responsibility for the single-vehicle accident that left you injured.

It’s important to understand that the concept of fault is complex in California civil law. More specifically, more than one party can be considered at fault for an accident, and those parties can share the liability for any injuries or other damages that resulted.

How does this apply to a single-vehicle accident? While the concept of comparative negligence is often used against injury victims in California, in this case, it might be helpful to you. That’s because, as the sole driver involved in your crash, you may hold some of the fault for what happened, but if you don’t hold all of the blame, you may be owed compensation.

Thanks to the doctrine of pure comparative negligence, any at-fault parties involved in your accident may owe you compensation proportionate to their percentage of the blame for what happened — regardless of your own level of fault for the accident.

Who Are Some of the Possible At-Fault Parties

Throughout California, various government agencies and municipalities are responsible for road maintenance and signage. It’s their job to make sure the roads are reasonably safe for travel, and if they fail in that responsibility, they can sometimes be held liable for injuries that result.

In other words, if your single-car accident was the result of an improperly maintained or unreasonably hazardous road, you may be able to recover compensation for your injuries from the government.

Rollovers are another common cause of single-car accidents. While a rollover may be the fault of a reckless driver, it can sometimes be the result of poor vehicle design that makes the car too top-heavy.

Some cases can get even more granular. For instance, if you had a single-vehicle accident and were hurt because your airbag failed to deploy, you might be able to hold the airbag manufacturer accountable for your injuries even though the failing airbag didn’t cause the accident — it simply allowed your injuries to happen when it shouldn’t have.

Proving that a major company like a vehicle manufacturer was negligent requires a lot of knowledge, experience, and resources. That’s why many motorists hurt in these kinds of accidents get a California car accident attorney involved.

Yours was the only vehicle in the crash, but another driver might have caused the crash by forcing you to swerve or stop suddenly. For example, if a drunk driver ran a red light, causing you to violently turn to avoid them and crash into a concrete barrier, the drunk driver was likely the at-fault party even though they walked away without a scratch.

Similarly, if a pedestrian ran out in front of your vehicle and caused you to crash to avoid hitting them, they might be liable for your injuries.

Determining who was at fault in your single-car accident is no easy task, but it’s a critically important one if you hope to recover full compensation for all of your damages. That’s why it can be so helpful to reach out to a trusted Costa Mesa car accident lawyer.

At Case Barnett Law, our experienced team of attorneys understands just how complex fault can be in single-vehicle accidents, and we know how to help you find a legal strategy that can see you through this mess and land you the compensation you deserve.