Were you injured in a car accident near Costa Mesa? Schedule a free consultation with our experienced legal team today. At Case Barnett Law, our experienced car accident legal team understands just how difficult it can be after suffering an injury from an auto accident, and we know how to help you find a legal strategy that can see you through this mess and land you the compensation you deserve. 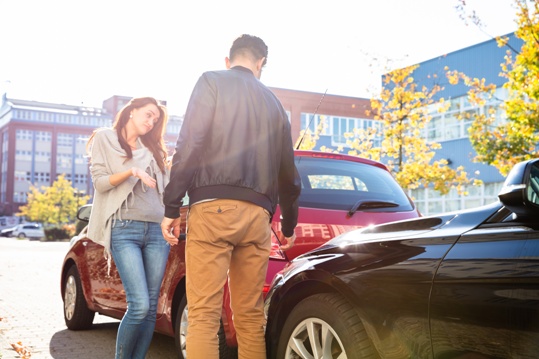 In California, people who have been hurt by someone else’s negligence can sometimes file a personal injury lawsuit to recover damages. If you were hurt in a car crash, for instance, you might be able to get back the money you spent on medical bills, physical rehabilitation, or even income you lost from having to take time off work. However, not every accident is clear-cut. Oftentimes, more than one person may be found at fault in an accident.

While you may worry that your own negligence precludes you from filing a personal injury lawsuit, our Costa Mesa car accident attorney explains that California law provides a special legal doctrine called “comparative negligence.” Even if you share part of the blame in a crash, you may still be able to get the financial relief you need.

Every state in the country has its own rules on personal injury lawsuits. Generally, states interpret negligence in one of two ways:

In other words, a person’s potential damages—the amount of money they can recover in a personal injury lawsuit—may be reduced in accordance with their fault. This reduction is usually represented by a percentage amount.

Consider the following example: it is a Saturday night, and you are driving home after meeting friends for dinner. You are passing through an intersection with a green light when you hear a text notification sounding on your phone.

While you are reading the text, a drunk driver blows through the intersection, ignoring a red light, and slams into the side of your car.

If you have a $10,000 award, then comparative negligence will reduce it by the 10 percent you were at fault—so you will receive $9,000 rather than the full amount.

If you take a car accident case to court, there is a good chance the other motorist—the defendant—will raise at least a partial defense by claiming you were responsible for some portion of your injuries. Their attorney will try to persuade a judge or jury that your injuries could have been minimized or avoided if not for your own negligence.

However, the defendant must prove their claims by showing:

Should the defendant’s argument successfully persuade a judge or jury, then your compensation will be reduced by the amount you are found at fault.

But because California is a pure comparative negligence state, you will still be able to collect an award even if you are found 99 percent at fault.

How a California Car Accident Attorney Can Help

Proving or refuting claims of negligence is not an easy task. If you have been involved in a car accident and are considering a personal injury lawsuit, you will want to consult an attorney with the experience needed to vigorously advocate on your behalf.

Your attorney will investigate the circumstances of your accident and collect evidence to demonstrate the other motorist’s negligence. This investigation may entail the acquisition of police reports, a review of surveillance camera footage, eyewitness interviews, expert consultations, and more.

When you are hurt by someone else’s negligence, you should not have to struggle for relief or pay out of pocket for your own recovery. Send Case Barnett Law a message online to schedule your initial consultation.