Can You Be Compensated After Being Hit By a Drunk Driver?

Hit by a Drunk Driver: Can I Seek Compensation?

Alcohol-related car accidents injured nearly 27,000 people and killed nearly 1,300 on California roads in 2017, according to the California Department of Motor Vehicles. Every year, we see startling numbers like this, but it’s about more than just numbers. Families suffer greatly when a single person is hit by a drunk driver, and we see this story play out thousands of times in California every year.

Fortunately, California law allows for compensation for being hit by a drunk driver. In other words, if you or a loved one suffered injuries at the hands of an intoxicated driver, you may be eligible for compensation.

Getting that compensation, however, is another matter. It will likely require you to jump through dozens of legal hoops and gain a significant understanding of relevant California laws. Case Barnett Law is here to help. Our team has put together this quick guide so you know how to seek compensation after a Costa Mesa drunk driving accident. Read on to learn more, or reach out to our firm for help. 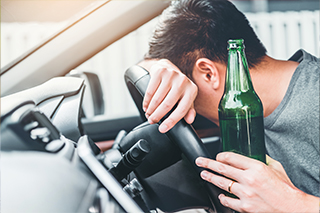 In any car accident case, if you want to seek compensation from the other driver, you will need to be able to show that they were in some way at fault for the crash. Fault can be difficult to prove in some types of auto accidents, but when one driver was drunk and the other wasn’t, that is usually a good sign that the drunk driver who hit you was at fault.

California recognizes shared fault in accidents that result in injuries. Thanks to this comparative negligence rule, multiple parties in an accident can hold some of the fault for what happened. If you were injured but hold some of the blame, your compensation can be reduced by a percentage proportionate to the level of fault you supposedly have.

That is why it’s important to accept no part of the blame for the crash. When the other driver was drunk, you stand a good chance of showing that the blame is completely on them. A trusted lawyer can help you make sure you don't accidentally accept blame and reduce your compensation.

Impact of a Drunk Driving Conviction on a Civil Claim

Recovering compensation for being hit by a drunk driver doesn’t depend on the outcome of any related criminal charges. Your claim for compensation as the victim is a civil matter — not a criminal one.

However, if the driver who hit you is convicted on drunk driving charges related to the crash, that is almost certainly going to boost your chance of recovering compensation for your injuries. Talk to your lawyer about how criminal charges against the other driver may affect your claim.

Who Is at Fault in a California Drunk Driving Crash?

To pursue personal injury compensation after you’re injured by a drunk driver, you need to know exactly who is at fault and to what extent.

In the vast majority of cases, the drunk driver will be considered the primary at-fault party in an accident. The reason why is relatively straightforward: It’s illegal and negligent to get behind the wheel when you are intoxicated, so any driver who does that is likely to bear the blame for a crash.

The Bar or Host Who Served the Alcohol (in Rare Cases)

In some rare cases, the party who served the alcohol to the drunk driver who hit you may hold a portion of the blame for the crash and your resulting damages. It’s rare, but it happens.

California law specifically states that social hosts and establishments are not legally accountable for damages that result from them serving someone alcohol. However, if a person or business serves a visibly drunk minor and that minor goes on to cause a crash and injure someone, the party that served the alcohol could be liable for the resulting damages.

You may know you were hit by an intoxicated driver, but you may still have to prove it as you seek compensation. How do you prove someone was drunk and therefore at fault for a crash? With evidence.

Your attorney will help you understand which pieces of evidence may be relevant in your case, but the following are some types of evidence that may be important in a drunk driving accident:

Various other pieces of evidence may be relevant in your unique case. Reach out to a lawyer to discuss which evidence matters and how to preserve it.

Compensation for Being Hit by a Drunk Driver in California

Compensation for being hit by a drunk driver should cover every single way in which the crash has harmed you. An experienced Orange County personal injury attorney can help you maximize your compensation.