A lot of people reach out to nursing home abuse lawyers with this question: “Can you sue a nursing home for bed sores?” Here’s the short answer: You absolutely can. That’s because bedsores are almost always preventable and typically develop as a result of neglect or abuse. Suing the negligent party not only gets compensation for the victim but also incentivizes a facility to reevaluate its practices.

But just because it’s necessary doesn’t mean suing a nursing home is always easy, especially when it’s part of a large, multi-state company. Big chain nursing homes typically have more legal resources than smaller ones, and they’re structured in a way that makes identifying at-fault parties a challenge. However, it is doable, especially with help from an experienced Orange County elder abuse lawyer.

If you need to sue a big chain nursing home but don’t know where to begin, don’t panic — the compassionate injury attorneys at Case Barnett Law are here to help. Our experienced attorneys understand the ins and outs of the California nursing home industry and know how to deal with the big chains.

When you’re ready to hold a big nursing home chain accountable for their negligence, reach out to a firm that’s up to the task. Contact Case Barnett Law to set up your free consultation or give us a call at 949-409-0055 today. 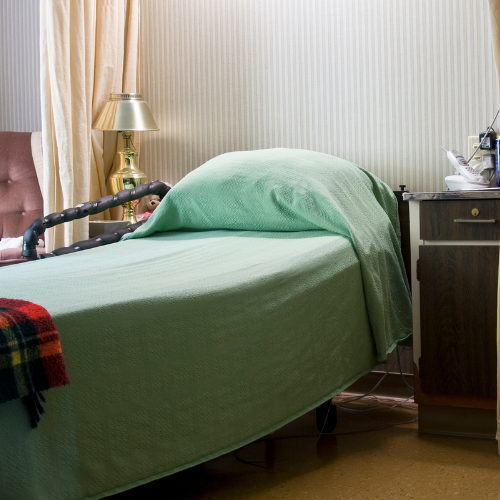 When a patient at a small nursing home develops bedsores, identifying how it happened is relatively easy. You can meet with the nurses and administrators directly, tour the facility, and speak with other staff. However, when you’re dealing with a big chain nursing home, figuring out who’s responsible for your loved one’s bedsores isn’t so straightforward.

Whenever you’re taking legal action against a large, multi-state company, you’re going to be met with a lot of bureaucracy and deflection. Your chances of pinpointing the root problem on your own are slim, especially when you can’t get all of the involved parties in the same room. You may end up naming multiple parties in your lawsuit, including some of the following:

Before deciding who to name in your lawsuit, it’s important to identify whether the bedsores were caused by structural failures, staff failures, or both. Although your loved one’s bedsores might have resulted from one staff member’s negligence, the issues could also be systemic.

For example, the nursing home’s administrator may consistently understaff the schedule in an effort to meet new corporate budget goals. Although your loved one’s bedsores resulted from an individual worker’s failure to consistently reposition them, should the exhausted staff take all of the blame? In this case, an experienced lawyer may help you name multiple parties.

In California, there are 120,000 licensed beds in nursing homes, about half of which are owned by 25 for-profit nursing home chains. Unfortunately, for-profit chains consistently fall below the state average in quality of care, staffing, and inspection measures.

Most people don’t realize how flawed many of California’s largest for-profit nursing homes are. A series of articles published in the Sacramento Bee in 2018 revealed many distressing trends and figures, including the following:

Major nursing home chains’ lack of transparency about poor performance and facility ownership have no doubt contributed to the nursing home abuse crisis. Experts warn Californians that they should do heavy research into a nursing home before committing to it — especially if it is one of the major for-profits.

What If You’re Not Sure Who Owns the Nursing Home?

It is no accident that identifying the real owner of any California nursing home is difficult, if not nearly impossible. They don’t want you to know who they are because they have faced so much liability for nursing home abuse and poor care in the past.

In any case, if you need help determining how to move forward with a legal claim related to bedsores, a qualified and experienced attorney can help you identify the owner of the nursing home, as well as your best next steps.

Can you sue a nursing home for bed sores in California? Absolutely. However, these cases are not always easy to win without significant documentation. If you’re thinking about taking on one of the state’s major nursing home operators in court, having an experienced elder abuse attorney at your side could make all the difference in your case.

At Case Barnett Law, we don’t just fight for the victims of nursing home abuse and neglect — we fight hard. It’s our mission to seek justice for the most vulnerable among us, and when we see nursing homes harming residents, we don’t back down just because they’re part of a multi-state corporation with teams of lawyers. We do what’s right for our clients — every time.