How Catastrophic Damage in Car Accidents Can Have Tiny Culprits 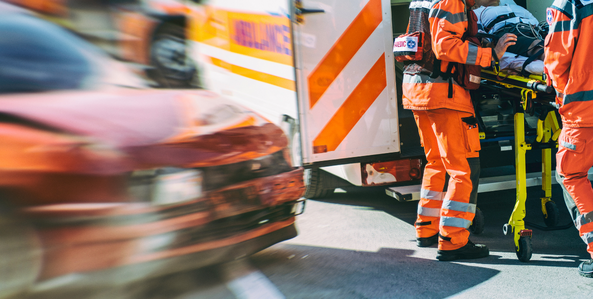 Last month an elderly California man was killed in a car accident. This tragic occurrence would not likely have gained much attention from the news but for the manner in which the accident occurred. The man was traveling northbound on the highway at about the time a state-owned Caltrans water truck was traveling that same highway, going southbound.

According to investigators, a metal cap used to seal the opening on the top of the truck’s water tank detached and flew across several lanes of traffic, striking the elderly man in his neck. The cap was described as being about the size of a baseball and about two to three inches in width. The man crashed into the center median before his car came to a stop. He was pronounced dead at the scene.

When a “Simple” Car Accident is Not So Simple

When one hears of an injury or death resulting from an Orange County car accident, one might naturally assume that the cause of the crash is simple and straightforward: One or both drivers drove their cars in a careless fashion and the crash ensued as a result.

For investigators and others looking at this case, determining the precise cause of the crash is not so simple. While it can be said that the cause of the crash was the metal cap that became detached and hit the man in his neck, this does not necessarily explain who or what entity was actually at fault. There could be any number of culprits responsible for this crash:

Answering the questions necessary to determine liability in a case such as this (unfortunately) takes time – the sort of time that surviving family members and/or injury victims do not generally have. The sooner such an investigation is completed and responsible parties identified, however, the sooner the victim(s) can obtain compensation and monetary damages for their losses.

This is why hiring an experienced personal injury attorney is crucial: The attorney’s experience and resources can be used to complete the requisite investigation in a timely manner. Injury victims who attempt to “go it alone” (unfortunately) find out quickly that obtaining adequate compensation for their losses is no easy task.

1. When Do I Get My Personal Injury Compensation Award?

Answering this question requires our legal team to analyze the facts and circumstances of the person’s situation and utilize our knowledge of the law to render an informed opinion as to whether the person has a realistic opportunity to recover compensation for his or her injuries and losses.

The second most common question – and an equally compelling question, too – that injury victims want answered is this: “How long will it take to get my compensation award?” This is understandable considering that many injury victims are facing significant financial hardships due to medical bills and decreased wages. Unfortunately, it is not always as easy to determine when an injury victim will actually get the money in his or her hands.

2. How do I know if I need an attorney after an accident?

If you come to us and talk to us we are going to analyze your case and we are going to look at the severity of the injury, the seriousness of the negligence on the other side. We are going to talk to you honestly and plainly about whether or not you should pursue a case, what the likelihood of recovery is and what the amount of that recovery might be. This is so you can make an informed decision.

3. How do I find a good personal injury attorney?

What separates one law firm from another is trial experience because not many lawyers have trial experience. As a public defender, I have tried more cases than 98% of attorneys out there and because I understand the end part of a case, what story is going to be told to a jury, it informs everything that leads up to that point. So if an attorney doesn't have trial experience, they really can't be excellent at all those things that lead up to it.

4. How much does it cost to hire a lawyer?

Most personal injury attorneys work on contingency. This means that you pay nothing unless your attorney settles your case or a jury awards a verdict in trial. Some law firms make their clients pay for costs associated with their legal matters. Additionally, some attorneys make their clients pay for the costs if the case is lost. At Case Barnett Law, we pay all costs. If we don’t win, we still pay all costs associated with your legal matter. Many personal injury law firms charge a 45% fee of the total settlement. At Case Barnett Law our typical percentage on a personal injury case is anywhere from 33 1/3% to 40%.

5. How will I pay my medical bills?

If you were injured in a car accident, the first thing you should do is seek immediate medical care. Medical treatment for any injury can be expensive—leaving you with a stack of mounting medical bills to deal with. Unfortunately, the insurance company for the negligent driver will most likely not pay your ongoing medical bills. They may take months investigating and disputing your claim before you see any monetary settlement. Here, we discuss how to handle paying your medical bills while you are attempting to settle your claim.