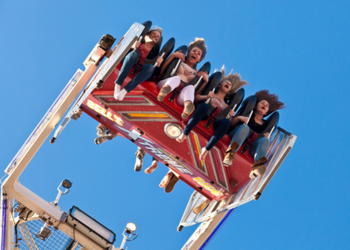 Every few months or so, we see a major amusement park accident dominating the headlines for a couple of weeks. If this is all you see, you might think that these accidents are rare, but that is far from the case.

In fact, California amusement parks saw more than 2,000 injuries that required medical attention over a five-year period, according to the Los Angeles Times. That means hundreds of Californians leave what was supposed to be a fun, family-friendly experience with serious injuries every year.

If you’re one of those Californians, you need to know two things:

Fortunately, a Orange County amusement personal injury attorney from Case Barnett Law can help. To get you started, we have put together this brief guide to pursuing compensation for an amusement park accident. Read on to learn more, or reach out to us to get started on your claim.

When Can You Sue for an Amusement Park Accident?

Amusement park accidents are common, but they don’t all warrant a lawsuit. In order to sue an amusement park for an injury you suffer, you have to be able to show that the amusement park in some way failed to maintain safe premises or was negligent in a way that led to your injury.

In California, the basic facts necessary for a viable personal injury claim — in which you pursue compensation from another party because of their negligence and your resulting injury or harm — are as follows:

Many amusement parks are run with precision, always putting guest safety first. But others are run carelessly with only one goal in mind: making more money. That means they may cut corners when it comes to safety or otherwise put guests in harm’s way. And it’s in those cases, given that you are within the statute of limitations and a few other key rules, that you usually can sue for an amusement park accident.

Amusement parks and theme parks are by no means standardized. Each one is different from the next, with different rides and attractions presenting unique risks. However, some accidents tend to pop up repeatedly in amusement parks. Here are a few examples:

While what really matters is the fact that you were hurt, the type of amusement park accident you were in may help you and your attorney determine who might have been at fault and whether you can sue. 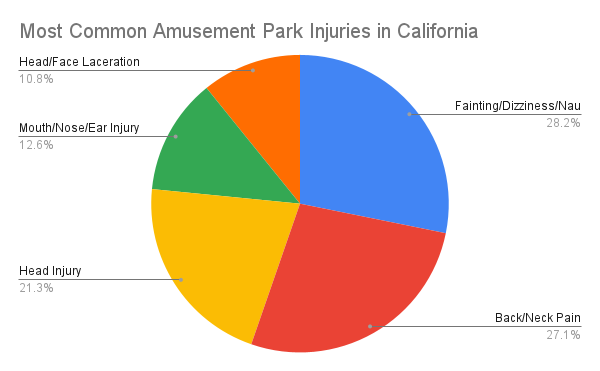 Amusement park accidents lead to serious injuries of nearly all kinds in California. However, some injury types were more common than others, according to data from the Los Angeles Times. Here are the top five types of amusement park injuries in California:

Other types of injuries common in amusement park accidents include whiplash, shoulder, and arm injuries, leg and knee injuries, and seizures.

Simply getting injured at an amusement park does not entitle you to compensation. But if someone who worked for the park was negligent, and that negligence caused your injury, you may be able to recover compensation for all the ways in which this accident has harmed you.

But what, exactly, does negligence look like at an amusement park? Here are some examples:

Many other actions or inactions can be considered negligent, and you may not always be aware of the ways an amusement park was negligent leading up to the accident that injured you. That’s why it’s important to speak with an amusement park accident lawyer who can investigate your accident.

Getting Help with Your Amusement Park Injury Claim

If you have been injured at an amusement park and plan to pursue compensation, you are up against what is probably a large corporation. That means you may face highly trained defense lawyers who know how to fight your accusations of negligence and keep you from the compensation you deserve.

The good news is that you can get your own lawyer — one who will know how to gather the right evidence and build a strong case for why you deserve compensation. Your attorney may check photo and video surveillance of the grounds, park permit applications, ride inspection reports, staff training protocols, witness statements, and more to build a bulletproof claim for you.

You don’t have to have a lawyer, but an attorney can certainly help. And if you’re like most Californians who have been injured at amusement parks, you can’t afford to lose this case. Our team will do everything in our power to make sure you win.

At Case Barnett Law, we know that finding the right personal injury lawyer for your lawsuit against the government can be crucial to your success. Luckily, we bring all the essentials to the table: experience, communication skills, a proven track record, and, most importantly, a commitment to our clients’ well-being.