Can I Use Dash Cam Footage as Evidence in Civil Court?

Dash cams are everywhere. Millions of them are clinging to car windshields on streets and highways across the United States, with a fair share of them here in California. And we shouldn’t expect them to go away any time soon — one major report estimated that the global market for dashboard cameras was likely to come close to $6 billion by 2025.

It sounds like dash cams are here to stay, so let’s talk about how we can use them. As it turns out, dash cams are useful for much more than just making viral YouTube videos. In California, you may be able to use dash cam footage as evidence in civil court.

In other words, if you’ve been injured in an auto accident and have access to some dash cam evidence, you need to keep reading or reach out to an experienced Orange County car accident lawyer right away. 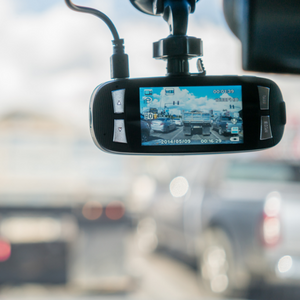 Most states have their own take on whether and where in the vehicle dash cams are allowed, and California is no exception. It is perfectly legal to install a dash cam in your vehicle, but you will have to follow a few instructions laid out in the California Vehicle Code.

In general, you are not allowed to have anything obstructing your windshield as you drive, but California law makes an exception for dashboard cameras as long as they are installed in one of the following places:

For each of these options, you must also ensure that the camera isn’t installed in an area in which an airbag would deploy in the event of a crash. And in any case, you cannot (and should not) install a dash cam in a way that obstructs your view of the road.

Now we have a little background on California’s dash cam laws, but can you use dash cam footage as evidence in civil court? In the vast majority of cases, the answer is yes.

Much like traffic light photos or videos of the accident occurring, dash cam footage of your auto accident happening provides valuable and relatively objective perspective on what actually happened.

However, there are some rare instances in which dash cam footage may be considered inadmissible. For instance, if you or someone else edited or otherwise altered the footage, it may not make for acceptable evidence.

Additionally, if your dash cam recorded audio inside your vehicle and captured the conversation of someone who didn’t know they were being recorded before your crash, you might have violated that person’s right to privacy. And the end result might be that the dash cam footage won’t be shown in your civil case.

Fortunately, those are relatively rare exceptions to the rule. In most cases, relevant dash cam evidence is admissible in California civil courts.

What About Insurance Claims?

Still, if you have dash cam footage of the accident in question, it is most often worth pursuing this point with the insurer. In the likely event that you face some pushback from the insurance company, you may want to consider contacting a trusted car accident attorney who can help them see your side more clearly.

How Dash Cam Evidence Can Help a Personal Injury Case

Typically, the footage is going to be helpful to you as the injured party if it:

The flipside of those points, of course, is that the dashcam footage can actually hurt your car accident claim if it shows you engaging in some kind of negligent action, such as running a red light, speeding, or even having a particularly lively conversation immediately before the crash occurred. And if you claim that you were severely injured, but your dashcam evidence shows you easily leaving your vehicle and speaking with the other driver without too much pain, it may be problematic to your case.

Sometimes, the details of dashcam footage can be a little tricky to figure out and understand how they might affect your case. That is when it’s helpful to contact an experienced car accident lawyer in California who can assess all of the evidence and your entire case to help you build an effective legal action plan.

Can You Use Your Dash Cam as Evidence?

Can you use dashcam footage as evidence in civil court? In California, the answer in most cases is yes, but you likely won’t know for sure until you reach out to a qualified auto accident attorney who can review your dashcam evidence and the details of your case.

We would be happy to help. The attorneys at Case Barnett Law are experienced trial lawyers who know how to put any and all available evidence to work in your California personal injury claim — always with the aim of maximizing your compensation.

Schedule a Free Consultation With a California Injury Lawyer Today

Ready to find out if your dashcam footage could help your case? Our legal team at Case Barnett Law is excited to help you get started. Contact us online or give us a call at 949-409-0055, feel free to enter your information into the online contact form at the bottom of the page. We represent injury victims throughout Costa Mesa, California as well as the surrounding counties which include: Orange, Los Angeles, San Diego, Fresno, Ventura, Santa Barbara, San Bernardino, Riverside, Imperial, and Kern.

Case Barnett Law fights for the rights of individuals injured and killed in auto accidents as well as those suffering from brain injuries, spinal cord injuries, and trauma after sexual assault.